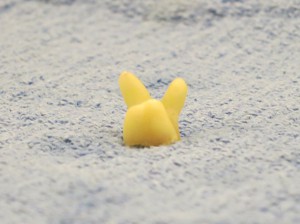 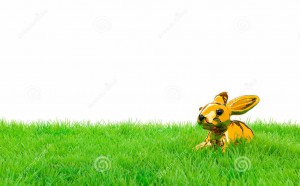 No, its not.  Those are diverging roots on a fully developed third molar in an adult patient that came to our office in pain for the extraction of his third molars in his 30’S.  Three roots with that level of divergence is a bit unusual and unexpected, especially since it was not clearly visible even in the CBCT prior to surgery.

This patient admitted that when he was undergoing orthodontics as a child, he was recommended to remove his third molars due to a lack of space.  Unfortunately, they elected to forget about it since it was “not bothering him”.  He waited until recently when his face became swollen and teeth became symptomatic.  This happens all too often, with patients delaying treatment until things become painful.  Pain is a sign of damage.  A lack of symptoms is not indicative that there is nothing wrong.  We have to go based on radiographic/x-ray findings.  A common analogy that I give to my patients is that many people that have cancer are completely asymptomatic.  But as soon as there is evidence of disease or some abnormality noted on an xrays or MRIs, then treatment is recommended.

Third molars are best removed in the younger years (<age 25), when the teeth are still premature and completely asymptomatic.  The post-operative recovery tends to be much less traumatic, with patients making a full recovery within 1-2 wks.  The older the patient and the further along the root development; the more difficult the procedure becomes for the patient both during and after the procedure.

Specifically on this patient:  this is his pre-operative panorex xray, with horizontally impacted third molars, with deep pocketing, loss of attachment and bone loss on the adjacent tooth (the second molars), with close proximity to the IAN canal, as depicted by the 2 parallel yellow lines on the lower R of the picture below: 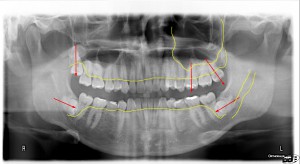 At this point we had no choice but to obtain a pre-operative CBCT in order to make sure the Inferior Alveolar Nerve (I.A.N) was not encased within the roots of the third molar.  On occasion, some patients question the need to obtain CBCT’s prior to surgery.  Without these imaging, you are just increasing your risk of complication, i.e. damage to the adjacent structures, i.e. arteries and nerves…  A CBCT provides us with very critical information on the proximity of the IAN and other vital structures at the site of surgery.  We would never ask a heart surgeon or a cardiologist to do surgery without the needed imaging such as a CT or a chest xray.  The same also holds true here.  See his CBCT below (the red line presents the IAN nerve): 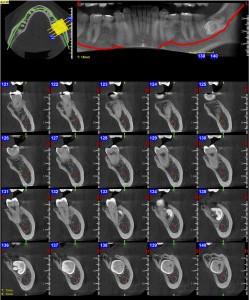 Since there was already deep pocketing and bone loss adjacent to the 2nd molar, this patient required bone grafting in order to improve the prognosis and longevity of the adjacent teeth.  See his post-operative panorex with the grafting material packed into the extraction sites in order to bring back at least some of the bone loss.  In these instance we may use a variety of bone grafting material, depending on the size of the defect and the damage to the underlying bone. 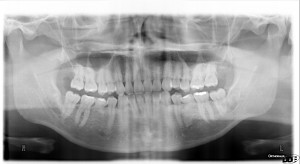 If he would have just extracted his third molars when he was a teenager, the would not have required a CBCT, because the root of his third molars would still be premature and not close to the IAN.  (see below – a panorex xray of a third molar in a teenager that is still premature, in the “bud” stage) 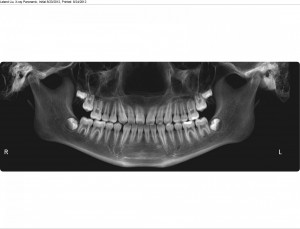 Additionally, if he would have just extracted his third molars when he was a teenager, the would not have required a bone grafting procedure, because third molar would have  still been encased in healthy bone without contamination of the surrounding area by the oral bacteria.

In summary, the older the patient when removing third molars; the more traumatic the procedure, the more expensive and the more the risk of complications.